Drink One Coffee a day

Drink One Coffee a day

Coffee is that one thing that millions of Americans start their day with. It’s  very warm, inviting , also full of caffeine that gives and offers a much-needed pick-me-up to get your day started. But, what’s really happening inside your body when you drink this cup of joe? Are you drinking something that is beneficial to you long-term , or are you fueling your body with a harmful substance ? With varying opinions on this topic , here is what science has to say about it  –  the good and the not-so-good. 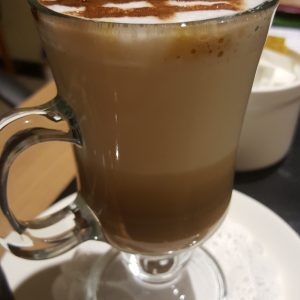 1. Protection against different types of cancers

Several studies have been conducted to see if the carcinogenic properties in coffee are linked to the development of cancer— a link that researcher have been unable to find. However several studies, including some cited by the  American cancer society have found that coffee could actually protect against many cancers.

The ACS website stated that “Coffee may lower the cause of cancer “, including head and neck, colorectal, breast, and liver cancer … Hundreds of biologically active compounds including caffeine, flavonoids, lignans, and other polyphenols are found in roasted coffee. These and other coffee compounds have been shown to increase energy expenditure, inhibit cellular damage, regulate genes involved in DNA repair, have anti-inflammatory properties and/or inhibit metastasis, among other activities.”

2. It could reduce your risk of suicide

Recently the suicide rates have been on the rise, causing millions — even billions of people worldwide searching for an answer on how to halt the devastating effects of this epidemic. And always this is hard for anything or anyone to claim  “cure” for that . Even so, the researchers did find a correlation between the consumption of coffee and a decreased risk of suicide.

A study conducted by researchers at the Harvard School of Public Health cited caffeine as the likely reason behind the findings. The authors of the study found that the suicide rate for adults who drank two to four cups of caffeinated coffee per day was about half that of those who always drank decaffeinated coffee or less or no coffee .

It was further found that the caffeine contained in coffee not only stimulates the central nervous system but may also act as a mild antidepressant by boosting production of some neurotransmitters in the brain like serotonin, dopamine, and noradrenaline. The caffeine essentially boosts people’s moods.

3. It may reduce the risk of Alzheimer’s and dementia.

If you are a bit seasoned in the years and you can enjoy a cup of coffee or two here and there – even up to five or six cups a day — you could reduce the risk of Alzheimer’s and dementia. In fact , one of recent studies found that drinking of 3-6 cups per day at midlife was associated with a decreased the risk of dementia and Alzheimer’s by about 66 percent later in life.

4. Reduces your risk of type 2 diabetes

Researchers at Harvard studied more than 100,000 people for nearly 20 years to find the correlation between coffee and the reduced risk of type 2 diabetes . What they found was that those who increased their coffee consumption by more than one cup per day had an 11 percent lower risk of developing the disease. They also found that those who reduced their coffee intake by one cup each day increased their risk of developing T2 diabetes by 17 percent.

While researchers don’t know the exact cause, they suspect it has nothing to do with caffeine, because the stimulant has actually been linked to a change in both glucose and insulin levels. And how your body reacts to the caffeine is really dependent on how your body metabolizes it. Either way, caffeine has found to be a negative factor on blood sugar, which leads experts to suggest that if you must drink coffee, make it decaf.

1. You could get addicted

Unless you drink decaf, coffee contains a high amount of caffeine. In fact one cup of coffee contains 95 mg of caffeine, which is more than enough to get you up and going in the morning. The fact of the matter is, however, caffeine is a drug, and as such, it is an addictive chemical that can create a dependency. Continued  research on the topic of caffeine addiction has lead medical professionals to give an official term to the condition called, caffeine use disorder. Individuals with this disorder have behavioral and physiological patterns similar to those produced by other drugs of dependence.

2. For years, people and even experts have named coffee as a diuretic, trying to explain why many frequent coffee drinkers urinate often. Continued studies have not linked the ingredients in coffee as contributing to frequent urination, rather the fact that when you drink more, you urinate more. So, if you drink too much coffee, so expect a lot of that liquid to go same  where other liquids go: to your bladder to be emptied out when it is full .

3. You could lose sleep

Caffeine is a stimulant that is most often used to keep you going during an often tiresome day. And, most people know this, and drink willingly. That being said, if you drink, say, later in the afternoon, you can expect to be wide awake come bedtime.

In fact some studies found that consuming caffeine 6 hours before bedtime reduced total sleep time by one hour. These effects also can be stronger in older adults because It takes their bodies a longer time to process the caffeine.

4. It could negatively affect your bones

Now this one is a bit controversial and lacking in evidence, but please read on.

For many years, there have been reports of heavy coffee drinkers and a decrease in bone mass and an overall brittleness to the skeletal system. Due to this several medical professionals and scientists have suspected that caffeine had a negative effect on calcium absorption.  However, no concrete evidence has been found, leading researchers to believe that the correlation is merely due to the fact that heavy coffee drinkers are not getting enough calcium in their diets.

So, you could drink less coffee, or you could balance it out with milk, almonds, broccoli or other calcium-rich foods.

5. It could cause or worsen acid reflux

Many coffee drinkers have complained of acid reflux, reporting that it worsens after drinking coffee. This has lead researchers, once again to find the source of the complaint. Some cite the acidity in coffee, while others believe it to be the caffeine and the way it is prepared.

many still complain of the heart burning effects. If you believe coffee is to blame for your heartburn, you may want to abstain. However, if you want to continue to drink your beans in a warm mug, try avoid brewing methods like espresso or French press that don’t use paper filters that can catch the oil droplets in the coffee which contain the stomach irritants. Perhaps you can try cold-brewed coffee to prevent any heat factor.